Student ID Cards Far From Sure Ticket to the Voting Booth 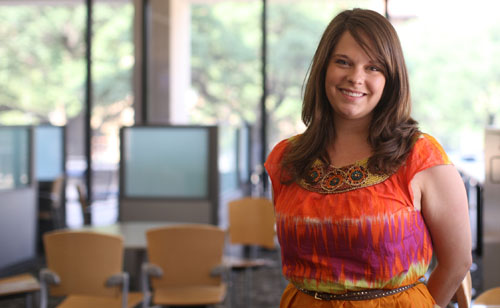 Natalie Butler, a 2012 graduate and former student government president of the University of Texas at Austin, said a Texas law that would prevent voters from using student IDs could have a negative effect on the voting process. She is particularly worried about local elections in Austin, where student turnout rates already are low. Photo by Lizzie Chen/News21.
Natalie Butler, a 2012 graduate and former student government president of the University of Texas–Austin, said the law would have a negative effect on students. She is particularly worried about local elections in Austin, where student turnout rates already are low.
“If we’re going to make it even harder for students to impact city politics, that’s a huge problem,” she said.
In addition to restrictions on using school IDs, students face challenges based on residency. Out-of-state students must choose which state they want to vote in — their home state, where they may have to file an absentee ballot, or at school, where they face scrutiny from local residents.
In New Hampshire, Republican state Rep. Gregory Sorg tried last year to bar college students from voting in the state unless they lived there before enrolling. And state House Speaker William O’Brien, a Republican, received national attention when he mentioned voting restrictions that would affect students, such as same-day voter registration, and then attacked how he presumed students would vote.
“Voting as a liberal, that’s what kids do,” he was recorded saying at a New Hampshire Tea Party event. “They lack the life experience and they just vote their feelings.”
Sorg’s bill, which did not pass, included provisions that would have let students prove their state residence if they really planned to stay there, but Sorg said most college students live on an isolated campus and have no community ties.
“It distorts the way a community is run,” Sorg said. “Transients could descend on a community and take it over.”
In Maine, state Republican Party Chairman Charlie Webster accused 206 out-of-state college students of committing voter fraud. That prompted Secretary of State Charlie Summers to investigate.
Summers, also a Republican, found no cases of voter fraud or double voting, but he mailed letters to all the students, asking them to either cancel their registration in Maine or apply for a state driver’s licenses.
Despite these challenges to out-of-state students, Stern said the League of Young Voters encourages college students to vote in the state where they go to school because the process of receiving an absentee ballot is so complicated.
“The likelihood of students registering at their parent’s house and then correctly filling out the application for an absentee ballot is low,” Stern said.
Lizzie Chen, Alia Conley, Emily Nohr and Alex Remington of News21 contributed to this article.
Jack Fitzpatrick was a Hearst Foundations Fellow this summer for News21.